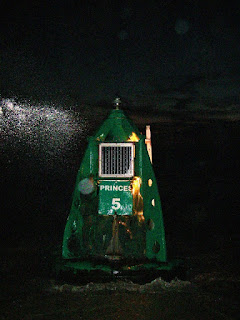 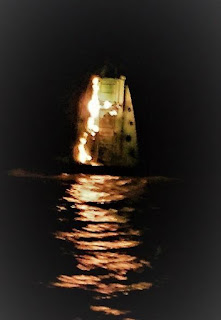 The volunteer crew of the Sheerness RNLI all weather lifeboat ‘The George and Ivy Swanson’ were called by the UK coastguard at 5.20 am on the morning of 16 February to reports that a craft was on fire in the area of the Princes No. 5 light buoy which is situated some 16 miles from the lifeboat station and seven miles off Herne Bay ,North East of the wind farm in the extremely busy main shipping channel.
Whilst on route a further call was received that it was not a craft on fi…re but the actual light buoy itself!
The lifeboat crew were requested to proceed to the location and arrived on the scene at 6.12 am to find the buoy well alight.
The on board fire hose was deployed and the fire was extinguished at 6.35 am after which the lifeboat was released and returned to station and after refuelling was ready for service at 8.20am.
Sheerness RNLI lifeboat coxswain Robin Castle said :’ in all my years at sea and as lifeboat coxswain this was one of the most unusual calls i have ever attended. I have never heard of a buoy catching light before and can only assume that it was caused by an electrical problem which is also strange as the light buoys are solar powered’
print