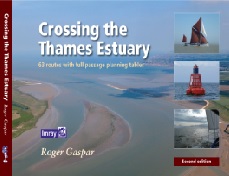 Permanent from the UKHO

1. ENGLAND – South East Coast – Dover S -Wrecks. Revised depth (reduced) on an old wreck off Dover in the Inshore area. Plenty of water at 14.5;
2. ENGLAND – East Coast – River Thames – Barking Reach – Depth. – reduced depth (4.9m) to the East of the Thames Barrier on the northern edge of the deep water;
3. ENGLAND – East Coast – River Crouch – Buoyage. – This is an official rfepeat of the Crouch local NtM about the deletion of the three yellow special buoys marking the previous Wallesea shiooing turning circle.

1. CANVEY ISLAND – WASH AND DRAW-OFF DANGERS ON PUBLIC BEACHES – usual annual warning by the Port of London Authority to avoid dangerous wake off Canvey;
2. Dredging at Harwick berths and vicinity – usual procedure starting from 21st March for about 10 days – Disposal at the Inner Gabbard;
3. Brightlingsea Harbour is conducting dredging;
4. Lowestoft Outer Harbour – Borehole works 20th March for 2 weeks approx;
5. Dangerous Wreck on the Buxey Sand edge of the Swallowtail channel – This is an ‘unofficial’ notice to Mariners. *I have been told by Mr Alan Bird, a local oyster dredger and yachtsman who has seen detail of the ‘Obstruction’ in the channel between the Swallowtail and the Buxey Sand. *Charts currently show there is an ‘Obstn’ drying 2m at 51.40’951N, 001.03’541E. *However, Mr Bird records the position as 51°40’924N *001°03’660E – which is further from the edge of the Buxey Sand in approximately 1.5m CD, narrowing the channel between the two sands – and believes the ‘Obstn’ is substantial and dangerous remains of a wreck. *It is not marked! Mr Bird has submitted an H102 to the UKHO but kindly given me details of the wreck and a copy of the images. *I have selected the best two images of the overview. *Note that the tail end of the Swallowtail can be seen on the left of the image showing how narrow the channel is. The waypoint symbol on the chart image shows the position recorded by Mr Bird. Usual page is http://www.crossingthethamesestuary.com/page9.html – select the Temporary list.

Local NtMs compiled by and reproduced by kind permission of Roger Gaspar, author of Crossing the Thames Estuary
print