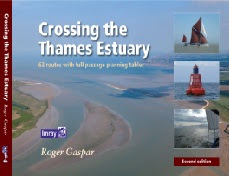 Only news in the monitored area about three new editions of Admiralty Charts (on 19th October):

1. GRAVESEND REACH – CHIMNEY DEMOLITION – EXCLUSION ZONE – from 7.00am on Thursday 28th September 2017 an exclusion zone will be established in front of the Tilbury Power Station for the demolition of the two chimneys. See image on the usual page: http://www.crossingthethamesestuary.com/page9.html (in the Temporary List);
2. ST CLEMENTS REACH – GRAYS TERMINAL – JETTY WORKS & DREDGING OPERATIONS – from today for Jetty Works and Dredging for four weeks from 16th October (Image on the usual page);
3. DARTFORD CREEK – DARTFORD CREEK BARRIER – INSPECTION AND MAINTENANCE WORKS – inspection and maintenance works on the Dartford Creek Barrier from Tuesday 10th October 2017 until Thursday 12th October 2017. Navigation closed;
4. Potton Bridge Survey Work – Closed for navigation for 4th and 5th October;
5. Raysand Middle Buoy – off station and missing (wonder if it has sunk – eek!);
6. Dredging Operation in the Brightlingsea South Channel 8th October to 20th November – only pass with permission from the HM;
7. Dredging in the Port of Wells.